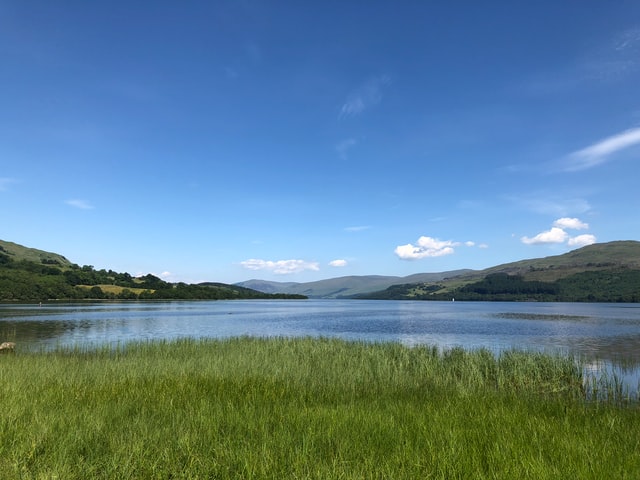 
As if the cities of Edinburgh and Glasgow aren’t enough to fill your time with, there are bucketloads of things to see and explore outside of these cities. Lying just a short trip outside of Edinburgh or Glasgow are a number of quaint seaside towns, gorgeous lochs, enchanting forests, and much more. No matter where your interests lie, these amazing day trip places offer something for everyone to enjoy.

To the north of Glasgow, located amongst the luscious greenery of the Trossachs National Park, is Loch Lomond. If you’re a nature lover or outdoors person, this place is guaranteed not to disappoint. From mountain hikes and cycle paths to waterskiing and kayaking, Loch Lomond just about covers everything.

Loch Lomond Shores is the ideal place to visit to go out onto the water, whether that be on a boat trip, in a pedal boat, on a sailboat, or something else. There’s a range of water-based activities to choose from as well as eateries and shops to take a break in and soak in the atmosphere.

Branching out all around Loch Lomond are numerous wondrous walking trails. Waiting to be discovered in the hills are some tantalising panoramic views of the loch that will make your hike an unforgettable one.

But it’s not just in the water and the hills that fun activities can be found here. Above above, amongst the rustling trees, is the TreeZone Aerial Adventure Course. Adrenaline fuelled excitement is not in short supply here with zip wires, tightropes, balance beams, and scramble nets ensuring a wild time.

Car — From Glasgow city centre, the journey to Loch Lomond is approximately 50 minutes.

Train — You can take the train from Glasgow Queen Street to Balloch which takes approximately 50 minutes.

Situated north between Edinburgh and Glasgow is a fascinating town steeped in history and brimming with historical attractions — Stirling. With a lot to discover and much to learn about, Stirling is a packed day trip.

The National Wallace Monument is a famous landmark erected in honour of William Wallace who led his troops to victory at Stirling Bridge. The towering monument stands at 67 meters on the hilltop of the Abbey Craig, looking over the town of Stirling. Besides the impressive view from the tower, inside there are three exhibition galleries to help you learn more about Scotland’s national hero.

One of Scotland’s largest castles, Stirling Castle is historically and visually one of the most striking and interesting castles in Scotland. The imposing castle sits atop a rocky crag on Castle Hill, making it the focal part of the town. You can immerse yourself in the history of the castle and Scotland itself through an audio or guided tour of the castle. If you feel hungry or thirsty there’s the Unicorn Cafe where you can take a break.

Car — Accessible from either Glasgow or Edinburgh, it takes 40 minutes from Glasgow and 1 hour from Edinburgh.

Escape to the peaceful town of Peebles

A short distance from Edinburgh, Peebles is a charming town with luscious green scenery, cute cafes, independent boutique shops, and a range of outdoor activities to get stuck into. Located in the Scottish Borders, it is in the centre of Upper Tweedale and is surrounded by delightful green hills and heather Moors with the Salmon-packed River Tweed flowing through it.

One of the best things to do in Peebles is to grab yourself a mountain bike and head out to  Glentress Forest which contains 50 miles of purpose-built mountains biking trails. Suitable for anyone, the tracks range from the easy green route for beginners and the orange ‘extreme’ route for adrenaline chasers.

Peaceful walking trails are not in short supply in Peebles. Janet’s Brae and its various nature trails are perfect for a soothing walk and a chance to meet the local wildlife.

Car — The journey time from Edinburgh is approximately 50 minutes.

Explore the incredible Isle of Arran

The Isle of Arran on the West coast, near Glasgow, has everything from beautiful beaches and green forests to a stunning coastline and the towering Goatfell Mountain. Spending more than a day here is highly recommended, however, you can still see the highlights in a day.

For hiking enthusiasts, the creme de la creme of Arran is the spectacular Goatfell Mountain. The main feature of the island’s skyline, Goatfell is the highest point of Arran at 874 metres. The jagged summit and rocky ridges are something to behold and make for some scenic photography while the panoramic views are nothing short of breathtaking. Reaching the summit can take between 2 and 5 hours, depending on your speed, so be prepared and bring supplies.

Located on the east coast of the island is the picturesque Brodick Castle, Gardens & Country Park. Built in 1844, Brodick Castle will transport you back to the Victorian era, aided by an interactive visitor experience that includes a Victorian arcade, mood lighting, and a collection of period furniture. The surrounding area of the castle contains lush gardens, waterfalls, and woodlands home to some beautiful wildlife, namely the famous red squirrels. Wander around here to soak in some tranquillity. What’s more, the views over Brodick Bay and the Ayrshire coast are majestic.

To the west of the island lies The Machrie Moor Stone Circles, a fascinating collection of ancient stones. The Neolithic stone circles, standing stones, and burial cairns radiate an enchanting atmosphere, and all date back to 3500 BC.

Car — The drive from Glasgow to Ardrossan Harbour takes approximately 50 minutes. Once there, catch the ferry from Ardrossan to Brodick which takes 55 minutes.

Train — The train from Glasgow Central to Ardrossan harbour takes 45 minutes. The ferry from Ardrossan to Brodick then takes 55 minutes.

Visit the beautiful Isle of Bute

Situated in the Firth of Forth Clyde, the beautiful Isle of Bute is an absolute beauty. Easy to get to, the island is teeming with amazing attractions and stunning sights and is akin to heaven on earth for lovers of the great outdoors.

The island’s largest town, Rothesay is a quaint seaside resort, decorated with specks of Victorian heritage. The focal part of the shoreline is the Isle of Bute Discovery Centre, a unique 1920s structure that contains many interactive displays and free multimedia exhibitions showcasing the best of Bute.

Visit another of Scotland’s enormous list of castles at the ruins of Rothesay Castle. Built in the 13th century, the castle has an interesting history to uncover as well as creepy dungeons, grand halls, and stark stonewalls to explore.

Escape the town and head to the hills of Rothesay for a nature walk in Glen more. This terrific trail treats walkers with astounding views of the Island. Take a stop at Port Bannatyne before following the old tramway route to Ettrick Bay.

Discover the bliss of North Berwick

A wonderful coastal town situated outside of Edinburgh, North Berwick is super accessible and won’t disappoint should you decide to visit this spectacular day trip destination. This attractive town south of the Firth of Firth is brimming with things to do and places to see.

Hunched on top of rocky cliffs that overlook the Firth of Forth is the medieval fortress, Tantallon Castle. The scenery alone makes this place a must-see, but if you’re keen to learn more then the visitor centre offers information about the history of the castle.

When arriving in North Berwick you’ll immediately notice a rocky island covered in white. This is the Bass Rock, an island famous for its colony of Gannets. Due to a lack of toilets, the Gannets guano is what makes this island white! Any photos of this majestic island are sure to garner some attention on your Instagram.