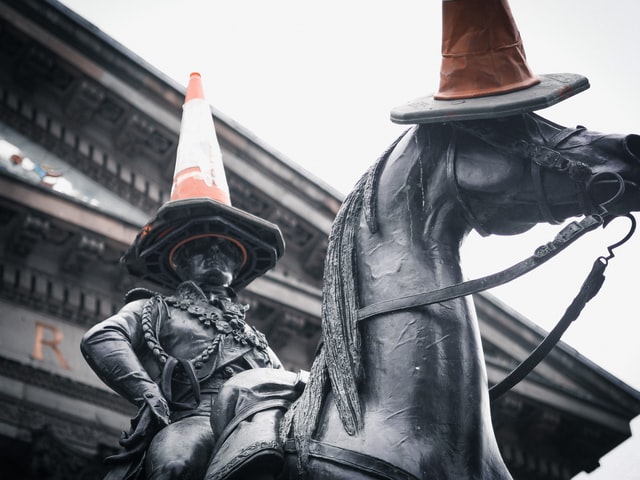 
Glasgow is a historical city with a tidal wave of heritage that has changed the world and made Glasgow the city it is today. From artistic pioneers to football pandemonium, Glasgow is home to a host of museums that have documented pieces of the city’s story thus far. You can uncover Glasgow’s history and place in the world by visiting some of these amazing museums. Many of the museums are attractions themselves due to their striking architecture, such as Kelvingrove Art Gallery and Museum, the Riverside Museum, and the Gallery of Modern Art. We’ve compiled a list of the best museums to visit in Glasgow that are guaranteed to educate, entertain, and live long in the memory after your visits.

Discover the world at Kelvingrove Art Gallery and Museum

Up first is the majestic Kelvingrove Art Gallery and Museum, located amongst the serene greenery of Kelvingrove Park. Outside of London, Kelvingrove Museum is the most visited museum in the UK and the most popular free tourist attraction in Scotland. That kind of reputation doesn’t come by chance, but by merit. If you’ve completed a leisurely stroll through the park then this is the perfect place to stop off at. The majestic red sandstone building, built in the Spanish baroque style, sits impressively on the edge of the park and is immediately noticeable. History, natural history, arms, armour, and art are all on display here in 22 glorious galleries and in the form of more than 8,000 pieces. The eclectic collection contains a broad range of exhibits from Salvador Dali’s masterpiece ‘Christ of St John of the Cross’ to ancient Scottish and Egyptian artefacts, and so much more.

Learn about Glasgow’s fascinating manufacturing history at the Riverside Museum

Located on the banks of the River Clyde, where the bygone shipbuilding era was once a booming industry, lies the Riverside Museum. Finding this museum is as easy as spotting an elephant in a room due to its impressive construction. The 7,500-square-metres of metal and glass stand out immediately as they zigzag along the top of the stark piece of modern architecture. A five-star rated attraction, what’s on the inside is equally as impressive. On display are historic modes of transport from the conventional to the unusual. A variety of old vehicles including cars and steam trains as well as a tall 19th-century ship have been collected over the centuries and settled here. The fine attractions are accompanied by interactive displays and films which help you learn about the 3,000 objects on display and Glasgow’s role in shipbuilding, train manufacturing and engineering.

Get your science goggles on at Glasgow Science Centre

As a five-star rated visitor attraction by the Scottish Tourist Board and one of Scotland's most popular paid-for visitor attractions, it’s fair to say that the chances of the Glasgow Science Centre being anything but a great day out are highly unlikely. Similar to the Riverside Museum, the Glasgow Science Centre is situated on the River Clyde and housed in a building of wonder. Rather appropriately as a science centre, the bright metallic dome and crescent-shaped construction wouldn’t look out of place in a sci-fi film. Once you’ve finished marvelling at the building from the outside, you can then enter inside where there are three floors teeming with over 250 interactive exhibits including a Planetarium and a Science Show Theatre. On top of this, there are events throughout the year from Space Zone, an immersive walkway that takes you through the solar system, to BodyWorks, a fun look at the science behind health and wellbeing. Have a look at their website to see what’s on during your visit.

Football fan or foe, the infamous rivalry in Glasgow between Celtic and Rangers is known all over the world and embedded in the city’s history. However, what you might not know is that the first official international football fixture was played in Glasgow in 1872 by none other than Scotland and England. If you’re an avid fan or just want to know more about Scotland’s long love (often a heartbreaking one) with football then the Scottish Football Museum is a must see place. Located in Scotland’s national stadium, Hampden Park, this museum has exhibits documenting everything from famous wins to a Hall of Fame. There are thousands of interesting objects on display that trace the history of football in Scotland as well footage of the most memorable games and some of the greatest players.

The Gallery of Modern Art in the city centre is home to a collection of amazing artworks from around the world. The four galleries take up the bulk of the iconic building, but there is also a cafe, a shop, and a library. The museum aims to foster a space for people to gather, learn, and share ideas. As the most visited modern art gallery in Scotland the museum puts a premium on collecting, creating and showing important new works of art from Glasgow, Scotland, and beyond.  In addition, situated in front of the gallery is a notable, humorous Glaswegian landmark — The Duke of Wellington. What’s so funny about it? A tradition dating back to the mid-80s has seen the statue decorated with an orange traffic cone on its head.

Get to know the Polis at Glasgow Police Museum

Glasgow’s 20th-century reputation as a city filled with grit and gangsters has much changed in recent times. The Violence Reduction Unit (VRU) has helped reduced knife crime tremendously in Glasgow since the city was dubbed the murder capital of Europe back in 2005. With that comes a substantial amount of history which is excitingly explored in this museum in Merchant City. It tells the story of the Glasgow Police that dates back 200 years when it was the first professional police force in the UK. The museum is run by volunteers from the Glasgow Police Heritage Society and has tours available for social groups that last approximately 1 hour 45 minutes. What’s more, there are over 2,000 items of interest stashed away in the International Police Exhibition. As a bonus, not only is this engrossing museum free, but you don’t even have to commit a crime to get in!

Renowned for being Scotland’s oldest museum, the Hunterian Museum and Art Gallery is home to a wide range of significant collections and also contains the Zoology Museum and Anatomy Museum within it. Founded in 1807, the museum is hidden away within Glasgow University’s grounds in an enchanting gothic building. Snap a few photos of the building at your phone’s desire then head on in. The vast collection includes scientific items used by James Watt, Joseph Lister and Lord Kelvin; Roman artefacts from the Antonine Wall; important natural and life science collections; Dr William Hunter’s own broad anatomical teaching collection, and the works of Charles Rennie Mackintosh. What’s more, inside the Hunterian Art Gallery is the reassembled interiors of Mackintosh’s Glasgow home in dedication to the acclaimed architect, aptly named Mackintosh house.

Enlighten your mind at St. Mungo Museum of Religious Life and Art

Glasgow has always been a deeply religious city. Historically, Protestantism and Catholicism have been the dominant branches of religion, however, the city has since grown into a welcoming melting pot with people from all over, including Muslims and Hindus. In this sense, it seems fitting that Glasgow is home to a museum that is dedicated solely to religion. A two-minute walk from Glasgow Cathedral, St. Mungo Museum of Religious Life and Art aims to promote harmony between different religions through understanding and respect. There are three galleries full of objects, displays and amazing pieces of artwork from Islamic sculptures to bronze carvings of Hindu Gods. On top of this, there is a Zen Garden (the first of its kind in Britain) with a cafe where you can grab something to eat or drink and soak in some serenity.

Surrounded by the open green parkland and bright trees of Glasgow Green lies the People’s Palace. As the name might suggest, the People’s Palace tells the story of the people of Glasgow from 1750 until the end of the 20th century. Encased in a stunning glasshouse with the beautiful Winter Gardens encircling it, this museum is the perfect place to visit if you are keen to learn about where Glasgow’s character comes from. Aided by the stories of Glaswegians throughout the centuries and various historic artefacts, paintings, photographs, films, and interactive computer displays, you can learn about this great city’s people.

Transport yourself back 330 million years at Fossil Grove

Tucked away in Victoria Park in the West End of Glasgow is a rather fascinating natural history museum. It’s not quite Jurassic Park, but encompassed by a wealth of beautiful trees lies Fossil Grove, a group of fossilised tree stumps and roots from a prehistoric forest discovered in 1887. There are eleven fossil tree stumps said to be about 330 million years old. As you wander around the small preservation you can take pictures, admire the calming aura, and learn about the trees through a series of displays. The tranquil environment is also a great place in itself to get some peace of mind.